About » History of the LUAG 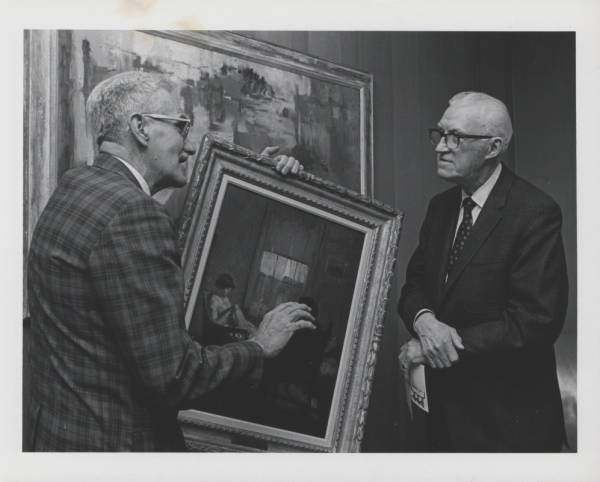 Lehigh University Art Galleries Curator Francis Quirk (left) discusses a painting with philanthropist Ralph L. Wilson in 1959.  Photo courtesy Lehigh University Photographs Collection.
Lehigh University’s first president, Henry Coppée, declared art one of the ‘elementary branches’ of education, as important to undergraduate learning as the study of math, science, history and language. His founding curriculum required all students to study drawing, and offered instruction in painting.
In those early years in Lehigh’s history, the walls of the President’s House were hung with artwork, and Packer Hall (now the University Center) housed a natural science museum. By 1926 the university was actively collecting and exhibiting art, ranging from the Old Masters to modern artists such as Gustave Courbet, Pablo Picasso, and later, photographers like Margaret Bourke-White.
Key moments in the history of the LUAG include:
• The first documented exhibition in November 1926, probably organized by the Swedish-born painter Emil Gelhaar (1861-1934), who was on the faculty at the university.
• In fall semester 1927, a "Fine Art" department was formally established at the university.
• In the first two decades of the LUAG’s history (1926-46), most of the exhibitions were sale or loan shows organized by other institutions, both local and regional, including most of the major New York museums.
• The LUAG held regular exhibitions of work by Lehigh students and artists in the community.
• The gallery's location moved through a number of spaces on campus, including Linderman Library and Alumni Memorial Hall.
• Collecting started early on. During many of the early exhibitions, the gallery often purchased or was gifted works by the exhibiting artists.  Preserved over many generations, works by these and numerous other artists form the core of the Lehigh University Art Collection, which now numbers over 18,000 artworks.