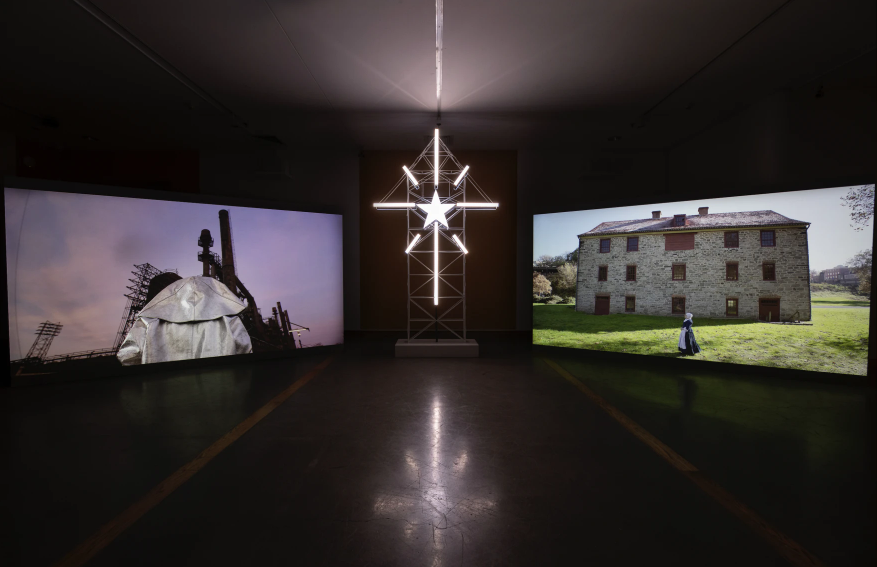 An art exhibit at Lehigh University shines a light on Bethlehem's place in American history.

The piece was created by Shimon Attie, a New York-based visual artist. It is on display at Lehigh University Art Galleries and titled "Starstruck: An American Tale."

Shimon Attie's "Starstruck: An American Tale" uses a smaller-scale Bethlehem Star and film to showcase Bethlehem as the story of America.

"Attie's project explores this distinctly American brew of religious utopian fervor," the installation's brochure reads. "Industrial capitalism's rise and fall, and finally, its reinvention in catering to the dreams of making it big on the part of casino goers."

In the installation, a smaller-scale model of the iconic Bethlehem Star lights up between two giant screens. The Bethlehem Star changes colors in sync with the videos on the two screens, which show a film production depicting some of Bethlehem's eclectic walks of life.

Characters in the film include a Bethlehem Steel worker, a casino employee, a nurse, a singer and a Moravian.

As the scenes of Bethlehem's economic boom and bust play on the screens, the exhibit's Bethlehem Star lights up in bright colors, spinning like a roulette table. The occasional casino sound blares behind Moravian choir singers.

Read the full article by Julian Abraham by following the link in the additional information box.