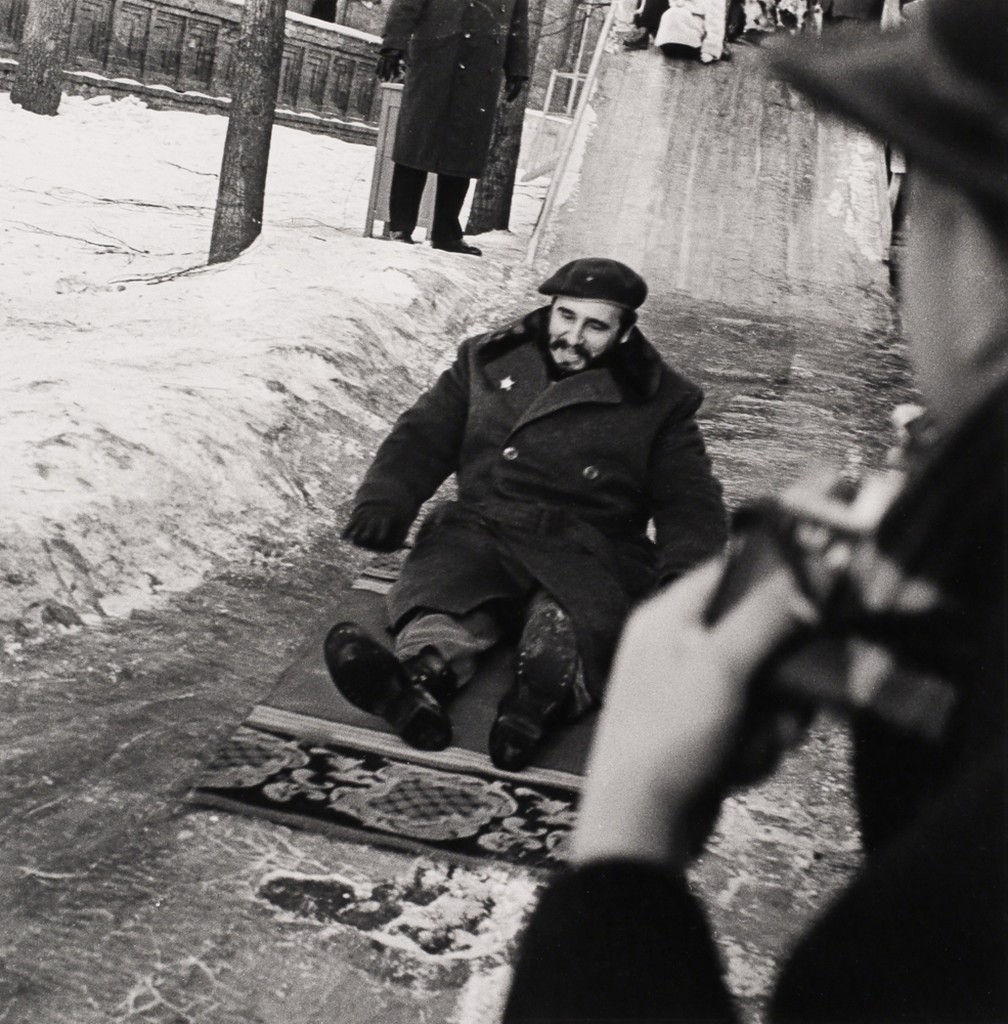 The above photograph, aptly titled Castro Sledding on an Oriental carpet, Moscow, was taken by Dmitri Baltermants in Moscow during the winter of 1964. An official photojournalist for the Kremlin during the Second World War, Baltermants was no stranger to the heavy Soviet censorship of national media. Tasked with documenting the war through a patriotic lens, much of Baltermant’s work had been oriented towards propaganda, with the intention of boosting civilian morale (Handy). Following the war's end, Baltermants was employed by the Russian magazine Ogoniok, granting him the opportunity to witness many historic landmarks in the Cold War (Handy). Among these moments was Cuban dictator Fidel Castro’s visit to Moscow in 1964. The photograph, upon careful examination, is quite telling of Castro’s misunderstood legacy.

Although Castro refused to identify with the Soviet Bloc, he saw the USSR as an ideological ally in the fight against America’s imperialist influence. Conversely, Soviet officials realized the significance of Cuba as the first communist foothold in the western hemisphere, and were eager to sponsor and advise the nation’s development. This partnership proved vital when the US enacted a trade embargo against Cuba in response to Castro’s seizure of American businesses as part of his nationalization of domestic industry (Yaffe). The embargo would have devastated Cuba’s sugar export economy if not for its access to the Soviet market and the generous subsidies provided by the Soviet government (McPherson 150). Thus, Castro’s arrival in Moscow must have been a major ordeal, and was likely presented to the public in celebratory fashion.

Baltermant’s picture captures the essence of the moment in Castro’s visible delight. His facial expression, something between laughter and a smile, emanates joy. This appearance stands in remarkable contrast to the American impression of Castro as a vicious and menacing tyrant. In the image, Castro appears not as a despot but as a child. His feet are pointed up in the air rather than planted firmly in the ground. The stiff coat stands almost autonomously, concealing his neck and giving the illusion of a stout figure, which is only worsened by the downward angle of the picture. He keeps his hands out in precaution, as if anticipating some jolting halt instead of a gradual deceleration. Visibly, the Cuban is a stranger to the physics of sledding, thrilled but also uneasy. Remove the badge and facial hair, and he might actually be mistaken for a child. This portrayal of vulnerability may seem absurd to Americans, who would expect any circulated image of a communist dictator to display power and authority. Especially to those who have been programmed their entire lives to fear communist leaders, this photograph must evoke a sense of bewilderment. But to Russians, there was nothing intimidating about Castro. Indeed, Cuba was an infant state, and a dependent of the USSR. Just as many western powers have extended the metaphor of paternalism to their colonies, so too did Russia probably consider itself the guardian of Cuba. Hence, the innocent depiction of Castro was quite natural.

To an American audience, Castro’s childish resemblance on the sled corresponds to the idealistic naivete of socialism. Alternatively, Castro’s volatility could be attributed to a child-like temperament. Regardless, he was descending the slippery slope of communism. The trodden snow beneath Castro’s sled indicates that the path had been taken many times before by other nations. And yet, Cuba posed a unique threat in that its trajectory came so close to the American homefront. Tensions had reached a climax during the Cuban Missile Crisis, in which the US imposed a naval blockade on Cuba after discovering its possession of nuclear missiles (McPherson 152). In retrospect, we can see that the collision was narrowly avoided, but at the time the escalation of the conflict into total war seemed imminent through the American lens. Equally relevant, the other photographer, which can represent a continuity of the American presence, is blurred. This is symbolic of the way in which the American public’s focus was on Cuba, but the American government’s own involvement abroad was often obscured.

Ultimately, both the Russian and American interpretations of the photograph are influenced by preconceived notions about Cuba’s international ambitions. To truly understand Castro in the moment, we must isolate the figure from foreign agents, focusing only on his individual character. Though the metaphor of youth is still befitting, there is another crucial hint in constructing his identity: the Oriental rug. People have always been quite innovative when it comes to sledding. In the absence of an actual sled, cardboard boxes and trash lids are popular makeshifts. But a rug, especially a decorative rug, is virtually unheard of. Oriental carpets were universally recognized as an emblem of wealth and luxury. Even if this particular rug was inexpensive, its decorative value should have precluded its use as a sled. Therefore, Castro’s willingness to expose an Oriental rug to the elements constitutes an open defiance of western opulence. The rejection of capitalist extravagance reflects a greater concern for the simple pleasures and necessities of life, a theme consistent with the Marxist philosophy. This firm commitment to socialist principles eventually translated into a series of impressive reforms in healthcare, education, and housing.

We can safely assume, however, that the rug did not belong to Castro. Despite his place in history as one of communism’s most ardent proponents, it seems Castro may not have actually practiced the frugality that he so fervently advocated for. According to the accounts of ex-associates, the dictator secretly possessed multiple luxurious properties, including a private island (Tamayo, “Fidel Castro’s Ex-Bodyguard”). Though his expenditures paled in comparison to those of contemporary despots, the disparity between his own comfort and the poverty of the Cuban people was a betrayal of the ideological foundation on which his revolution was built. The notion that Castro himself should be exempted from mandatory austerity was indicative of the leader’s narcissism. It was this very same narcissism that also motivated his strict suppression of dissenting opinions. Confident in his own intelligence, Castro had little patience for challenges to his intellectual authority. And more concerned with the uplift of Cuba than the means through which that uplift was attained, Castro was all too eager to suspend democratic processes. In fact, historians speculate that CIA attempts to undermine his government actually “gave Castro an excuse to jail opponents and force socialist unity behind his defense against Yankee imperialists” (McPherson 152). This infringement on civil liberties may not not have caused conflict if the government succeeded in perfectly representing the people, but Castro was not without his failures. Rather than consult experts on how best to structure Cuban industry, Castro resolved to manage the country almost entirely by himself. Blinded by his ego, Castro had overestimated his capabilities. The result, a centrally planned economy without sufficient planning, ushered in food shortages that would plague generations of Cubans (Alvarez). Critics of the regime soon emerged, but were subjected to imprisonment and execution.

Whether intentional or not, Baltermants’ photograph effectively captures the duality of Fidel Castro’s character. At once a notorious tyrant and a charismatic visionary, Castro managed to invoke worldwide controversy. Exhibiting both a child’s idealism and a child’s stubbornness, Castro’s reign in Cuba occupies a moral gray. His form of totalitarian utopianism led to a major expansion of public services, but it came at the cost of free speech. He repressed his own people, but he did so for what he believed was their own benefit. Therefore, Castro’s legacy is both in his vision of simple living and in the ruthlessness through which he attained that vision.

Click on the link below for a PDF version of the essay by Jordan Kaisman '24 and to view the citation list.