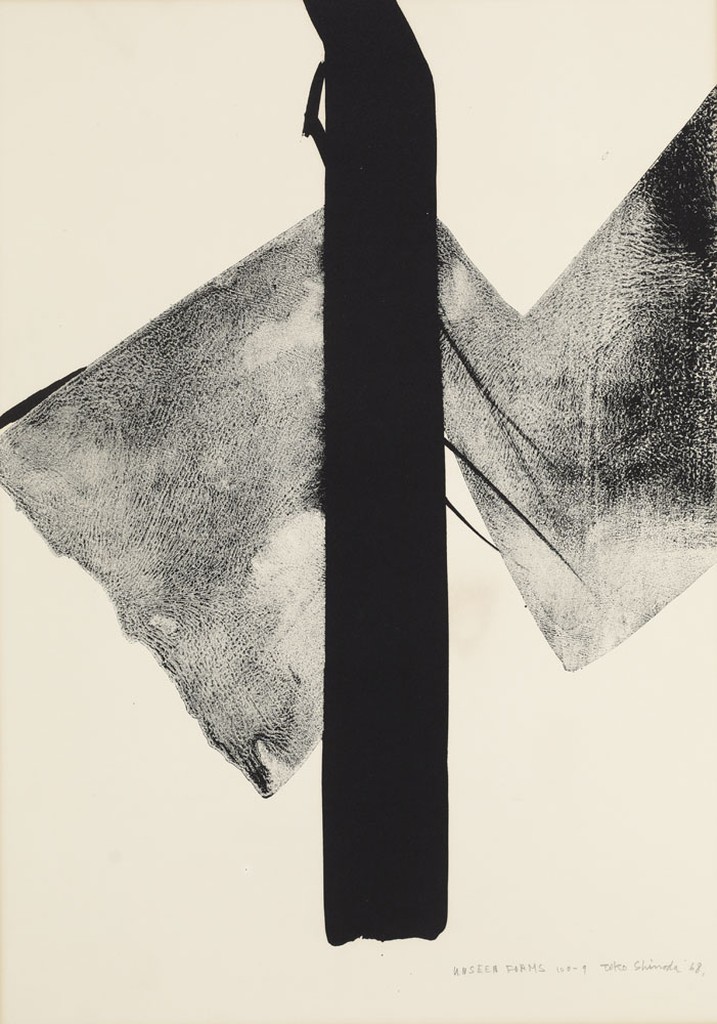 Many would think Shinoda’s art was greatly influenced by western abstract art due to its essence of abstract expressionism. However, though she visited artists like Jackson Pollock and Mark Rothko when she traveled to the United States in the early 1950s, she didn’t study western art and the major influence for her career was calligraphy. Influenced by her father who had profound interest in sumi ink painting, calligraphy and Chinese poetry, Shinoda began to learn calligraphy as a young child, and was active as a professional calligrapher in the 1940s. In her experiences as a calligrapher, she found that by extending the brush marks of symbols she was drawing, more energy and emotions can be better infused with the work she was creating to better express the feelings she attempted to convey. This realization led her to a journey as an abstract sumi ink painter.

Early examples of abstract ink painting dated back to the Tang Dynasty of China (ca. 618-907). After Buddhism was introduced to the country, its concentration on understanding the essence of life and everything around rather than simply copying their forms influenced the ink painters to capture the spirit of objects they are trying to portrait instead of pursuing realism in their paintings. Similar in style, Shinoda doesn’t pursue precise execution or definite portrayal of objects. As she once said, “If I have a definite idea, why paint it? Mount Fuji is more striking than any possible imitation.” Instead, she intends to convey a feeling or emotion through creating an atmosphere or experience for the audience in her paintings.

In Unseen Forms, the most obvious object I observed in the painting is a shape looking like a huge tree trunk in the middle painted with heavy ink and is richest in color. Surrounding it is a lightning-shaped stripe filled with patterns similar to animal or tree skin. Just like how when we are looking at an enormous tree in real life from an eye level, we can’t see the exquisite texture on the tree’s skin, we can only have a view of a trunk in this painting when looking at the trunk shaped black object in this painting. But surrounding it, the lightning-shaped stripe presents the “unseen forms” of the object just like the exquisite texture on trees that we can see only when observed carefully from a near distance. My lesson learned as an audience was to observe carefully and dig deep before granting conclusions on anything, whether it is people, instances, or behaviors.

Instead of the painting itself, I resonated the most with her inspiration for creating paintings. After understanding her purpose of creation, I felt that the creative process itself was a valuable yet intimate experience for the artist. Raised in a traditional Chinese family, I also learned calligraphy. According to my experiences, you are immersed in an intimate atmosphere alone with only the poetry you are practicing calligraphy on. This immersive state allows you to feel and connect with the poetry and use imagination between brush strokes to feel what the writer of the poetry felt. Similarly, I felt the process of painting and printing with sumi ink might be a similar medium for Shinoda to resonate with an object, or some unseen, unspeakable feelings. On the other hand, her paintings, or the outcome of her resonation, becomes the medium for us as an audience to experience her feelings again. Meanwhile, she gave her paintings straightforward titles, or titles that act as key words referring to an “outside experience of life” according to Phillip Barcio, to lead the audiences in those processes. “Art is something that stimulates an individual's thoughts, emotions, beliefs, or ideas through the senses” according to Antoni Gelonch-Viladegut. As I resonated with Shinoda’s reason for painting, her works of art successfully stimulated my emotions even more.

View this work on Artstor.

Information Systems with minors in Art History and Museum Studies.